Covid-19: Effect and Remedy for Rural Farmers in Nigeria 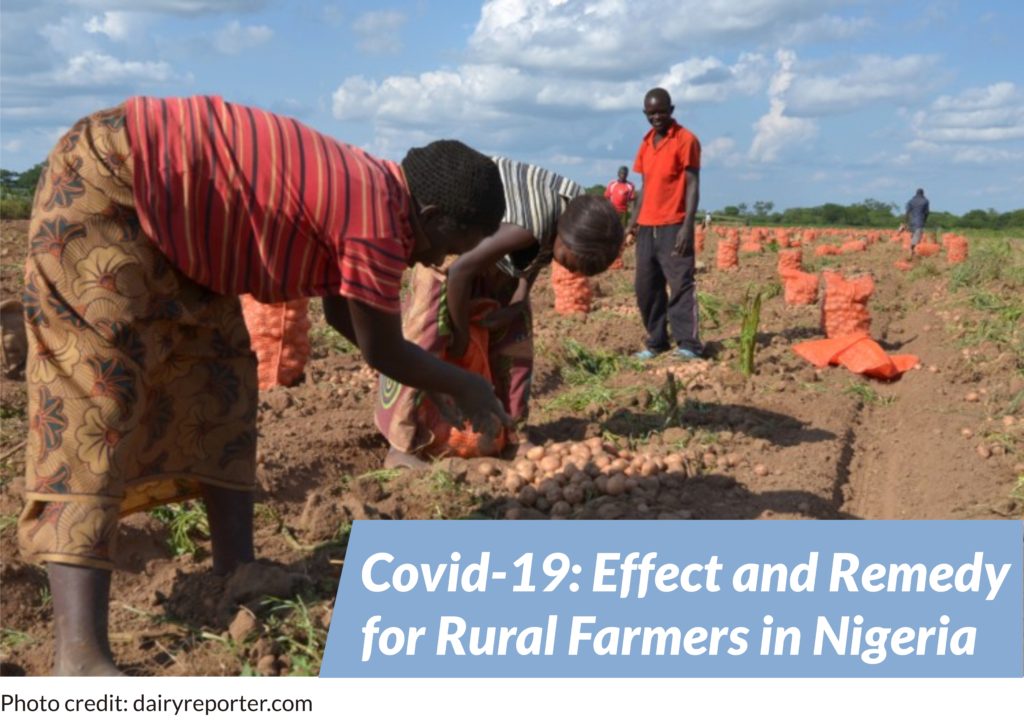 Who knew that in a time not distant, Covid-19 also known as Coronavirus, which began in Wuhan China, in December 2019, would have a profound effect on the average farmer in our local communities in Nigeria?

Ab initio, as a measure to contain the virus, the Federal Government of Nigeria declared a lockdown and inter-state boundary closure which resulted in the disruption of fundamental activities from business to school and access to basic facilities. The lockdown extension, owing to increasing cases of Covid-19, is gradually taking its toll on the economic downturn with deep-rooted consequences at the grassroots.

Recently, Nigeria’s Finance Minister, Zainab Ahmed, expressed after a National Economic Council meeting that Nigeria will go into a recession at an average of -4.4 percent. This was premised on the assessment conducted by the National Bureau of Statistics (NBS). Also, the World Bank estimated that a whopping 49 million people will be pushed into poverty by the pandemic. A large chunk of the new poor were projected to be in countries that are already being harassed by high poverty rates, while Sub-Saharan Africa is considered home for close to half of the projected new poor (23 million). It is worthy of note that Nigeria had earlier been adjudged as having the highest number of extreme poor. It is also no news that a vast majority (about 80%) of the extremely poor worldwide are domiciled in rural areas.

Although rural communities in Nigeria are less hit by the health upshot of Covid-19, the already poor farmers, however, are likely to suffer severely from the economic repercussions of the pandemic as the lockdown creates a backward stirring of the poverty-reduction wheel.

Firstly, several food markets, restaurants, eateries, and other areas of the hospitality industry are closed while those open are being faced with a decline in patronage, which triggers down to affecting the demand for agricultural produce. The disruption in urban businesses poses a serious challenge to the rural economy. Local farmers are confronted with a reduction in food demand, which creates a thorn in the flesh of their livelihood. Financial losses have been incurred through the current interruption of agricultural production, local demand-supply, and the export market. Moreover, an obtrusion of next year’s planting activities is in view, which promises an exacerbation of hunger and food insecurity in the country. To compute a few losses among agricultural producers are the poultry and goat farmers who already raised broilers for Easter celebration and goats for Eid al-Fitr, both of which were disrupted by the much-needed social distancing and lockdown orders by the Government. Rural crop farmers, many of whom are subsistent farmers with inadequate storage facilities, are obviously not exempted from the loss.

Secondly, most rural dwellers are found to depend on domestic remittances from their relatives who have migrated to the urban area; which is currently the hardest hit by the pandemic. Some urban migrants are currently being threatened to be out-of-job during and after the pandemic which suggests an increase in urban poverty and the inability to send remittances to their rural families. Some migrants might even be left with no choice than to return home and seek solace in the villages where they came from, adding to the existing financial stress in the family.

Empirical indications reveal that poverty, hunger, and food insecurity would be on the rise after the pandemic and beyond the short-term palliatives distribution measures, is a call for effective design and implementation of pandemic response and post-pandemic interventions for local farmers in Nigeria. In the light of the Sustainable Development Goals 1 and 2, it is pertinent to salvage both the existing and new poor, not only in urban areas but much still, in rural communities, especially the remote ones, who already stand at risk of being marginalized from safety-net programmes.

Some vital but non-exhaustive mitigation frameworks with direct and substantial benefit to the rural dwellers include the establishment of a “produce buy-back system” at the grassroots level, provision of farming subsidies, and financial aids to bear up losses, augmented rural infrastructure investments and increased rural livelihood diversification. Also germane, is an operative pandemic-relief agricultural policy to cushion against resultant agricultural losses at the local level.

Covid-19: Effect and Remedy for Rural Farmers in Nigeria

Contribute to this topic